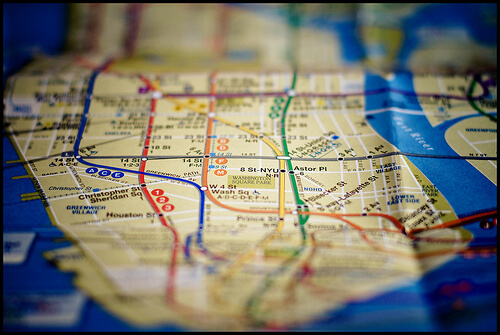 The MTA, in my opinion, should be one of the most lucrative “businesses” in the world rather than be in debt and sacrificing and/or cutting service that millions of people depend on everyday.

In a recent article by the New York Times it was stated that: “…subway riders will most likely notice leakier, dirtier stations. Part of the authority’s savings will be achieved at the expense of cleaning crews who fix water leaks and clean the steps of escalators. Automated MetroCard readers at the turnstiles will be inspected less often, and hundreds of the system’s oldest subway cars will stay in service longer.” This is completely unacceptable, and what’s worse is this attitude could lead to dangerous and hazardous health or physical risks to the riders.

My Two Ideas How to Save the MTA.

flickr photo credit: oblaat
For a moment, let’s consider that according to the MTA website there are 5.1 million people who use the system everyday as of 2009. Now let’s think of that in terms of internet traffic, which is equivalent to Google’s daily traffic (calculated from monthly average). I don’t know many people who thought of our subway in these terms, each day New Yorkers and tourists use our subway just as much as the entire world uses google.com!  The subway is unavoidable  for the majority of commuters and the amount of opportunities for advertisement placement is unlimited. With the “guaranteed” volume several millions travelers, selling ads should be lucrative since it’s one of the biggest businesses in the world. After all how do you think Google got all its money (become the #1 used service and sell ads). Now I understand the MTA already sells ads but it could be better, and I also understand that Google’s type of service doesn’t require nearly as many people as the MTA does to operate, which leads me to my next step to save the MTA.

flickr photo credit: jasonstaten
This may be a long shot because I don’t believe it’s ever been attempted, but what if the MTA stopped charging New Yorkers on a daily or monthly basis and instead taxed the 8.3 million residents of the five boroughs. This would allow the MTA to collect money from people who don’t even ride the subway/bus system as a result dispersing the burden more evenly across the local public. This would also allow New Yorkers to ride the subway/bus systems without concern of individual or monthly payments or yearly fare hikes. Furthermore, the 45.6 million tourists or non-New York residents would pay an elevated fare rate to boost improvements and maintenance of the system instead of permitting widespread degradation.

The MTA is the 4th most traveled mass transit system in the world, how do you want our subways to look?

Hi buddy, your blog's design is simple and clean and i like it. Your blog posts are superb. Please keep them coming. Greets!!!

Amiably brief but this entry helped me alot in my college assignement. I am grateful in seeking your information.

A thoughtful opinion and ideas I will use on my blog. You've obviously spent some time on this. Thank you!

I’m happy! It’s pleasant to see somebody quite educated about what they do. Keep up the fantastic operation and I’ll return for additional posts! Many thanks!

wow, awesome post, I was wondering the same thing. and found your site by google, many useful things here. bookmarked and also signed up your rss. keep us updated.

Hi - really great website you have made. I enjoyed reading this posting. I did want to publish a remark to tell you that the design of this site is very aesthetically pleasing. I used to be a graphic designer, now I am a copy editor in chief. I have always enjoyed working with computing and am attempting to learn code in my spare time.

As a Newbie, I am always searching online for articles that can help me. Thank you

Damn! this is really true. Never thougth this matter before but that's gonna change from now on! thanx!

Interesting, thanks a lot!

That's cleared my thoughts. Thanks for cogunibttinr.

*Nice post. I learn something more challenging on different blogs everyday. It will always be stimulating to read content from other writers and practice a little something from their store. I’d prefer to use some with the content on my blog whether you don’t mind. Natually I’ll give you a link on your web blog. Thanks for sharing.